Every time there is talk of an interest rate rise I am asked the question; “what will happen to annuity rates”?

My reply is always the same; “it all depends on what happens to bond yields”. By bond yields I mean the yield on gilts, corporate bonds and other fixed interest rate investments which insurance companies invest their annuity monies in.

Annuity companies take your money, invest in safe and secure bonds and then pay you back your original capital plus interest for as long as you live.

If bond yields rise so will annuity rates, but by how much?

The yield on 15-year gilts is a useful benchmark for annuity rates and this is quoted every day in the FT. Currently (5th November – Bondfire night!) the yield (which I call the benchmark yield) is 1.14% which is still at an historically low level.

Turning from bond yields to annuities, the annual gross income from a £100,000 annuity, joint life 2/3rds for ages 65 and 60 with level payments is currently £ 4,141 per annum gross. I refer to this as benchmark annuity.

How will annuity rates increase if the bank rate increase?

Using historical data, (see the chart below), we can see the official bank interest rate and gilt yields have been at historically low levels since the financial crash in 2008.

This means annuity income was about 50% higher before the Bank of England started to cut interest rates and started printing money through ‘Quantitative Easing’.

It is probably optimistic (or pessimistic) to think that interest rates will increase to 5% again but they could increase by a few percentage points.

If interest rates were to increase to say 2.5% from the current extraordinary low level of 0.1%, we can expect annuity rates to increase by about 25% which would translate into about £ 5,000 per annum before tax for the benchmark annuity.

A word of warning; interest rates and bond yields no not necessarily move in tandem. As the chart shows there are times when interest rates fall much further than yields and vice versa. Therefore, it is important not to confuse short term interest rates will long term rates.

For example, it is possible that interest rates could increase by 1% and annuity income could jump to £5,000 or even £6,000 per annum. 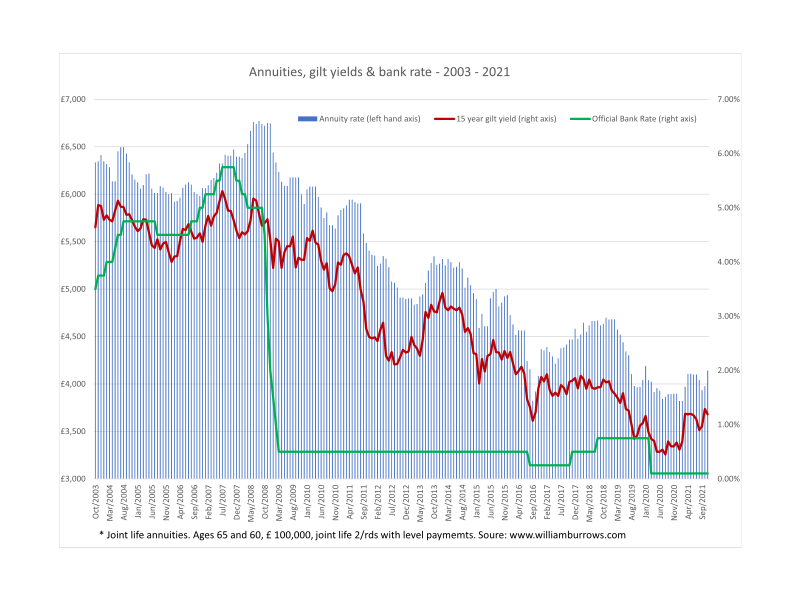 Annuities have been accused of being very poor value. This accusation is untrue and misleading and there are a number of academic papers which demonstrate annuities are good value.

This is different to saying that the pay out from annuities is low, which they are because of the low yields.

As the income from annuities increases they should start to become more popular and considered to be offering better value.

Annuity rates will rise if interest rates, but unless there is a significant increase in the bank rate, any increase will be measured in a few hundred pounds per annum. Whilst any rise is welcome, a rise of a few hundred pounds is unlikely to make annuities much more attractive in the short term.

However, if the increase is measured in thousands and the benchmark annuity increases to £5,000 or even £ 6,000, they should become much more popular and a hard act to beat.

William has been involved with retirement options for nearly 30 years, advising clients on all aspects of annuities and retirement income options.

He is a regulated adviser with Eadon & Co He has have many years of practical experience in advising clients about all aspects of pension options at retirement and he is passionate about helping people make the right decisions about their pensions and retirement income.

William also publishes guides including the popular ‘You and Your Pension Pot’ and ‘The Retirement Journey’.

He is frequently quoted in the national press and appears on radio, podcasts and videos and writes extensively on retirement income matters.